Grid-Interactive Net Zero Energy Buildings (G-NZEB) which can be described as ‘highly energy-efficient, grid-connected buildings that meet their energy needs through renewable means, while maintaining a two-way communication with the grid’ are in its nascent stages of adoption in the South Asian region. They are critical to an energy efficient future which taps into demand flexibility offered by buildings and equipment.

The ZerO-In platform, an extension of the Net Zero Energy Buildings Knowledge portal takes the discussion forward from a singular net zero building to high performing, smart, connected and flexible developments which have lower environmental impact. MAITREE’s activities for engagement and outreach include: 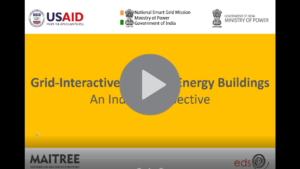